This week, Capgemini, HP and Sogeti released the sixth version of their annual World Quality Report. Key findings include increasing significance of QA and Testing along with bigger testing budgets. For the first time, Crowdtesting plays a significant role among more than 1500 senior IT executives that participated in the study. 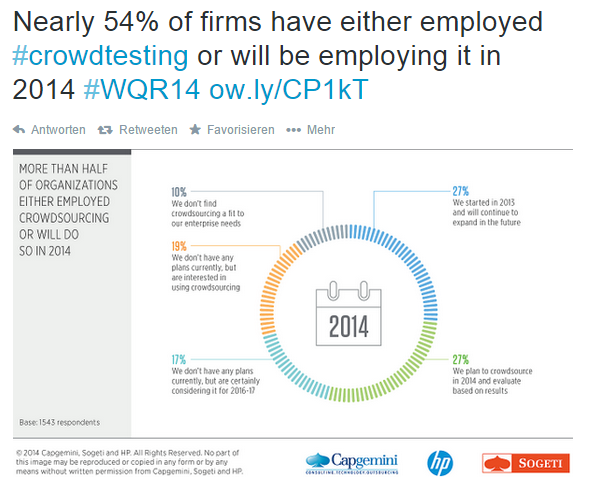 The Rise of Mobile Apps and Mobile Testing

Testing budgets have increased constantly from 18% in 2012 to 26% in 2014. This trend is likely to continue since 35% of organizations are currently n ot satisfied with the budget allocated to Testing. While only 31% of all companies did any kind of mobile testing in 2012, this figure has spiraled up to 87%, almost nine out of ten, by 2014. This highlights the importance of mobile applications in general and the need for thorough testing in particular in order to be successful in a competitive market. Mobile testing efforts are shifting towards testing the complete user experience (functionality, performance and usability), alongside security testing. The importance of usability testing has increased from 36% in 2013 to 45% in 2014. Likewise, compatibility and regression testing have risen from 29% in 2013 to 42% in 2014, due to an ever-growing spectrum of devices and operating systems.

The Importance of Crowdtesting increases

Thus, crowdtesting has become a preferred solution to address these challenges, especially for mobile testing. As an addition to internal testing, utilizing the crowd continues to become a standard testing approach within the industry. A staggering 90% of participants are already using crowdtesting (27%), plan to do so in 2014 (27%) or are interested in the topic. 17% are considering it for 2016-17 and 19% do not have any plans at the moment. However, there are still concerns about data protection and releasing sensitive information to the crowd. Testbirds addresses these challenges through various levels of security, including NDAs and a special Private Secure Crowd approach to establish secure connections while testing, with minimal risk for the company.The World Quality Report 2013-2014 highlights the enormous potential for crowdtesting in the (mobile) testing industry, especially since testing complexity will continue to increase due to device fragmentation and the emergence of new device types, such as smartwatches and other gadgets.Download the full Word Quality Report 2014-2015

Markus fails miserably at losing his southwestern accent. He handles all internal and external communications as well as the expansion of the Testbirds crowd.