At the start of next week, more than 70,000 people from around the globe will be flocking to Barcelona for Mobile World Congress, the world’s largest exhibition and conference for the mobile industry. As a partner of GSMA, the organizer behind the event, Testbirds is proud to be exhibiting at MWC for the second year in a row. Therefore, with  MWC coming up, Testbirds seized the initiative to test the official MWC app to assess the app from the end-user’s point of view.

With this year’s overarching theme being ‘Creating what’s Next’, thought leaders and industry visionaries will be sharing their visions for the future of mobile technology. The keynote speakers include Mark Zuckerberg, the founder & CEO of Facebook, and Virginia Rometty, Chairman, President and CEO of IBM. At the same time, the exhibition will showcase the industry’s leading companies, technologies, solutions and services – including Testbirds. Furthermore, MWC is the place where major mobile device manufacturers will be launching their next generation of smartphones. Rumour has it, that Samsung will be launching the Galaxy S5 at the event next week. This was proven true beginning of February when Samsung sent out event invitations through Twitter with the suggestive title ‘Unpacked5’. As you can see, MWC is truly the place to be for mobile industry professionals! 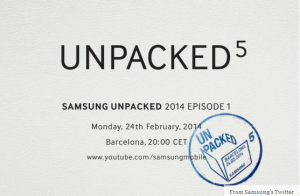 An event the scale of Mobile World Congress takes a lot of organizing. Whether you are an exhibitor, speaker, journalist or attendee, your schedule is likely to be packed. This is when a good app organizer can be an absolute lifesaver. That being said, Testbirds wanted to crowdtest the official MWC app to see how end-users perceive it.  One of our service offerings, a BugAbility test was utilized to find bugs and usability issues. The group of testers consisted of people between 26 and 56 years old, from 14 different countries representing the sheer diversity of MWC attendees.  They tested the app on their own devices, in their own environment and gave feedback and recommendations for improvements. The results included 28 bugs, proving that there is always room for improvement, even with an application for an event the scale of the MWC. Details of the results for the independent GSMA case study can be found at our Testbirds booth. 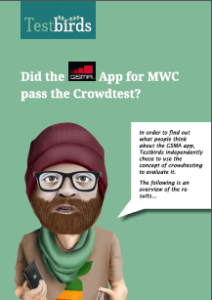 What happens at MWC

Concerning the event itself, Philipp Benkler, the founder & CEO of Testbirds, and Hans Benkler, the Benelux Manager, will be there on behalf of Testbirds. You can find them at the Bavarian Booth in the App Planet (Hall 8.1. Stand I59). During the four days at MWC, they will be attending meetings, sessions and interviews as well as introducing the concept of crowdtesting to attendees. Philipp will also be speaking at the WIPJam sessions as part of the Developer Workshop. He will be discussing the importance of testing with other testing experts. The fun and light hearted session will take place on Monday 24th Feburary at 16:15pm. Location: Fira Montjuic, Hall 5 (just off Placa Espanya), Room 3, Level 2, Hall M5.If you are attending the MWC, make sure you come visit us during the event.¡Hasta la vista!