People become part of our crowdtesting community for different reasons, depending on their interests and possible rewards. In order to both create the best possible circumstances for high-quality results and to foster tester activity, we asked our community what motivates them to contribute to crowdtesting. The following is a summary of the results.In general, scholars distinguish between motivation that comes from within (intrinsic) or from an external source (extrinsic). For crowdtesting, the monetary reward can be considered the main extrinsic motivator. However, there are also intrinsic factors at work, such as altruism and autonomy. From previous exchanges with the Testbirds crowd, we know that the opportunity to contribute towards a better product/software or the possibility to work flexibly are considered important factors for many people as well.Thus, the survey focused on twelve motivational factors (compare table below), comprising 29 individual questions in total. 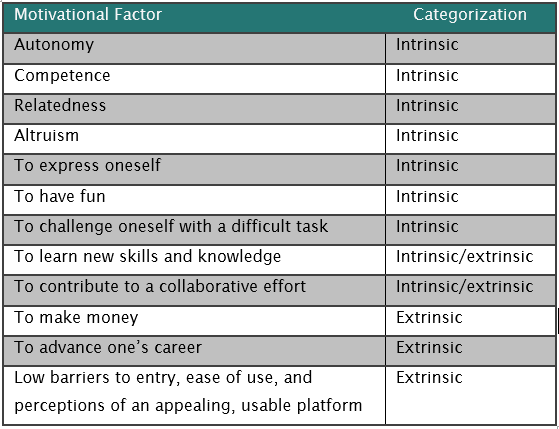 Altogether, 505 people participated. On average, they were 29 years old, comprising 64% men and 35.6% women between 14 and 72 years. The majority of the participants are located in Europe. Although a high number of participants work in the IT industry professionally (41,2%), there is no significant association between previous testing experience and the number of tests they have participated in.

All testers mainly driven by money

The testers in this sample are not willing to contribute to crowdtesting in the absence of monetary rewards. Research shows that extrinsic rewards like money can have an undermining effect on intrinsic factors, which has to be taken into account. From the beginning, it has been a common practice in the crowdtesting industry to pay testers for their work. However, highlighting the contribution testers make, enabling them to advance themselves outside of testing projects and allowing them to work flexibly are likely to increase motivation even more.Examples of this could be the implementation e-learning components to actively accumulate knowledge or showing how the test results were used to improve the application.Interestingly, there was almost no significant difference between testers with previous experience in the IT industry and those without. This supports the basic concept of crowdtesting to utilize consumers as well as professionals in order to test software. While consumers can provide valuable feedback, professionals come into action mainly for functional testing. Although the results for this particular sample of testers cannot be generalized to the entire community, it gives an indication how important both extrinsic and intrinsic incentives can be and that both should be made available to the crowd.

Markus fails miserably at losing his southwestern accent. He handles all internal and external communications as well as the expansion of the Testbirds crowd.