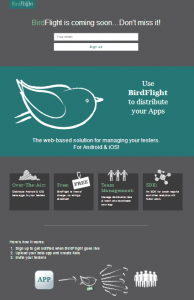 With more than one million apps in the Apple App Store and Google Play, competition is tough. It has never been more crucial to test applications before launching them, but app distribution and tester management can be difficult. Hence, there is a great need for a free platform where app developers and project managers can distribute their apps.

In 2010, TestFlight started offering free over-the-air beta distribution for iOS and Android developers, which became a widely used app testing platform. However, the company was bought by Apple last month, thereby making their services exclusive to iOS developers. According to the company, TestFlight will shut down Android support as of March 21 (TestFlight, 2014), leaving a gap in the market. As Testbirds is distributing beta apps for their crowdtesting projects on a daily basis, the founders have decided to open up the crowdtesting platform to Android & iOS developers before March 21. Philipp Benkler, co-founder of Testbirds explains:

“Every developer should have the opportunity to distribute iOS and Android beta apps to their testers, even if they don’t use our crowdtesting service. This is why we decided to open up the app distribution of our platform to everyone free of charge”.

The perfect addition for crowdtesting and test automation

The platform will launch under the name of BirdFlight, and will provide a free solution in addition to the existing crowdtesting and test automation services offered by Testbirds. According to our founders, this addition to Testbirds’ existing portfolio has been in the pipeline for a while now. They decided to speed up the process in light of recent events. “We are making it a priority to ensure BirdFlight will be available before TestFlight ends its support for Android later this month” says co-founder Georg Hansbauer.To begin with, the distribution platform will include team management to control downloads. If the demand is high enough, BirdFlight will also support SDKs for the full testing package, like crash reports and other insights. The intention is to keep BirdFlight absolutely free. In addition, our professional crowdtesting service will be available as usual for developers who require expert testers or specific focus groups.Interested developers can now get more information about BirdFlight on our website.

Share it if you like it:Tag CloudAbout the authorAndrea is from Iceland, travelling a lot and one of these people who call themselves world citizens. At Testbirds, she makes our brand visible online and offline.CategoriesLinksOther content that might be interesting for you:Testbirds specialises in the testing of software such as apps, websites and Internet of Things applications by using innovative technologies and solutions. Under the slogan, “Testing Reality”, the company offers various testing methods to its clients looking to optimise the user-friendliness and functionality of their digital products. With over 250,000 registered testers located in 193 countries, Testbirds is one of the world’s leading crowdtesting providers. In addition, the IT service provider utilises cloud based technologies to support customers in the optimisation of their digital products. The combination of the two testing methods delivers a unique and extensive portfolio that takes the quality of software to the next level. Testbirds was founded in 2011 by Philipp Benkler, Georg Hansbauer and Markus Steinhauser. Today, the company has over 100 employees. Other than its headquarters in Munich, there are now offices in Amsterdam, London and Stockholm, franchises in Hungary and Russia and sales partners in Italy.© Testbirds GmbH. All rights reserved.