The Use of Big Data in Business

Big data can help your business grow, by letting you make decisions based on facts and not on gut-feeling. But what is big data and how did it help companies like Netflix and Amazon reach their success? Let’s find out!

In 1956, IBM launched the IBM 305 RAMAC stuffed with a hard disk drive. You’ve probably seen the images of this huge device that weighed over 900 kilos. But do you also remember how much data could be stored on its hard drive? No? I’ll tell you: 5MB. No, I didn’t mix up M and G, it really was only 5 megabytes. I found a nice ad for the RAMAC on YouTube which I’d like to share with you.

Even if we have huge possibilities for data storage, in the meantime it’s not enough to store the amount of data we’re generating every day, every minute, every second. We’re not talking about giga- or terabytes anymore – we’re talking about peta-, exa-, and zettabytes. Those are numbers that I can’t even fathom. To give you an estimation: 1 zettabyte is roughly equal to the world’s internet usage in 2016.

Big Data: From 5 Megabytes to 149 Zettabytes

So, what does that IBM RAMAC have to do with our topic of big data? Well, I used that example to show you how little time it took for the amount of data we generate to explode. The amount of data generated every second is crazy – thanks to the Internet and social media. 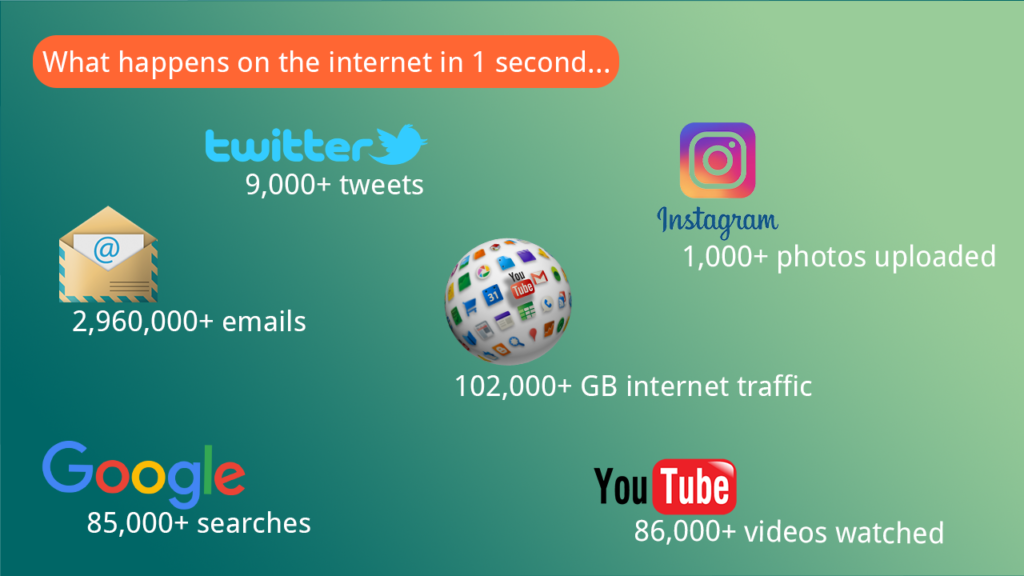 Statista predicts that the amount of data created, captured, copied, and consumed in the world will reach 149 zettabytes by 2024. In comparison, it’s “only” 59 zettabytes this year.

And that’s where the term big data comes into place. According to Wikipedia, big data is a field that “treats ways to analyze, systematically extract information from, or otherwise deal with data sets that are too large or complex to be dealt with by traditional data-processing application software.” In everyday life, however, the term big data mostly refers to “the use of predictive analytics, user behavior analytics, or certain other advanced data analytics methods that extract value from data, and seldom to a particular size of data set.”

Now that we know how much data flies around the Internet every day and that there are ways to deal with it, the next thought for clever businesses is quite obvious: “How can I make use of big data?”.
Let’s have a look at some examples to get a feeling for what can be done and improved by analyzing the right data and drawing the right conclusions from the analysis.

The Use of Big Data in Business – Examples

Let me give you a rough idea of the amount of data that is generated on Netflix day by day. At the end of 2019, Netflix had 167 million subscribers all over the world who watch more than 1 billion hours of video per week or 140 million hours per day.
That’s a huge amount of data and Netflix knows how to use it – Netflix is a completely data-driven company. Decisions are made based on facts, not on gut feeling or movie licenses that are available.

To explain this point in detail, let me guide you through the process of how Netflix decided to buy the rights for the U.S. version of “House of Cards”, outbidding big players like HBO and AMC. The price for the first two seasons was around $100 million. And as we all know, this decision was truly worth it. The first season of House of Cards premiered in February 2013, exclusively on Netflix. As a consequence, revenue rose up to $1 billion in the first quarter of 2013 compared to $899 million in Q1/2021.

But how could Netflix be so sure about the success of this series? Guess what: because of data 😉

What Netflix knew, before investing $100 million:

Thanks to algorithms, Netflix doesn’t even have to spend a lot of marketing budget to make sure people tune in. As Steve Swasey, Netflix’s VP of Corporate Communications, said, “We don’t have to spend millions to get people to tune into this.  Through our algorithms we can determine who might be interested in Kevin Spacey or political drama and say to them, ‘You might want to watch this.”

This is just one example of how big data can help you make well-informed decisions. Knowing your user and knowing your target audience is a big step on your road to success. If you want to read more about the data use of Netflix I can recommend these articles from Selerity and Salon.com.

As you’ve probably noticed, Amazon really perfected the recommendation game. Whenever you buy something, Amazon will tell you what other customers bought together with it. But big data doesn’t only help Amazon predict what you will buy next, it also supports their supply chains and pricing models.

Did you ever wonder how Amazon is able to deliver so quickly? Sometimes even on the same day? The answer is: anticipatory shipping. The idea behind that term is to get your order as close as possible to your address before you even click “buy”. Sounds crazy? Well, it’s only data analysis – okay, pretty fancy data analysis made possible by AI. At Amazon, AI is analyzing data, making decisions, and performing tasks that normally need the involvement of humans. That makes AI the heart of Amazon’s anticipatory shipping.
As Jenny Freshwater, Software Director in Amazon’s Supply Chain Optimization Technologies Group, says to NPR, “It goes beyond just being able to forecast we need a hundred blouses.  We need to be able to determine how many do we expect our customers to buy across the sizes, and the colors. And then … where do we actually put the product so that our customers can get it when they click ‘buy.’ “

The AI is able to forecast demands based on past demands and general online-shopping habits. Those forecasts start at a very simple stage “You don’t sell a lot of Chicago Cubs gear in Hawaii”, but rise up to much more complex learnings like the demand for sunscreen. Of course, it’s higher in summer, but there are also peaks in winter when people travel around the world to enjoy winter at the beach.

Again, we can see that big data and AI help the company in getting to know their customers better. Sometimes it seems that they know us better than we do. 😉

Microtargeting is a term coined by political consult Alexander P. Gage. According to Wikipedia, it’s a “form of targeting that uses recent technological developments to gather large amounts of online data. The data from people’s digital footprints analyzed to create and convey messages that reflect an individual’s preferences and personality.”

Microtargeting helps businesses cluster their customers or potential customers in very small and convergent groups to develop perfectly fitted messages and ads. The simplest form of microtargeting is probably a form we all know quite well – once you’ve started research for a new laptop you see ads for laptops on every site you visit on the web. The goal is quite obvious: you should be influenced in your decision of which laptop is the best for you to buy.

While this is a pretty easy and harmless example, microtargeting offers a huge range of targeting strategies which – as always – can be used in a good or bad way. A fact that has led to a lot of discussions whether or not Facebook, Google, and Twitter have the right or even the duty to restrict microtargeting on their platforms when it comes to untruthful messages that are being spread on their networks.

Although the term microtargeting isn’t exclusively used for political campaigns, it is still very closely tied to politics and played a big role in the elections in 2008 and 2012, a time in which Julius van de Laar worked for Barack Obama’s winning campaigns in nearly a dozen states. There, he focused on reaching voters and gaining supporters by combining conventional campaigning tactics with the latest new media strategies. Rather than me telling you how he used storytelling and microtargeting during this time, why don’t you listen to him personally? We’re very happy to welcome him as a speaker at our online event, the “Digital Thinkers Forum”. Be sure to save your spot now in our free online event. 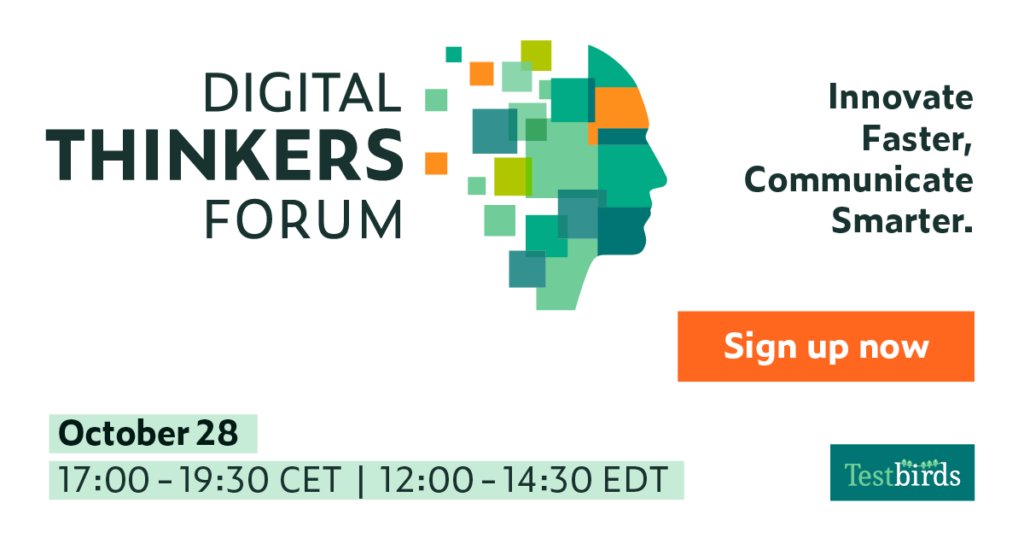