Gaming is more popular than ever. With over 250 million players worldwide, eSports is recognized as a real sport by the International Olympic Committee and could even be a medal event at the 2024 Olympics. The gaming market is growing strongly as well: With a revenue of $109 billion, world-wide gaming revenues grew by 56% in the last five years, according to the 2017 Global Games Market Report by Newzoo.

So as the gaming community is growing and thriving, new games are being developed continuously to keep consumers entertained, which means game developers have a huge competition to stand up to. However, tight budgets and production delays are reasons why testing is often neglected – no game publisher wants to be late for the Christmas sale. But to win over customers, it is essential that games are high in quality and thoroughly tested prior to their release, because end-products with bugs will often lead to criticism and ultimately, to less sales.

That’s why we teamed up with our partners SQS and MoGi Group for this year’s Game Developers Conference! From March 19-23, we will be in San Francisco to provide our expertise in the following areas:

Quality Assurance
Games are getting more and more complex nowadays: In open-world games, players have seemingly endless possibilities when it comes to exploring the environment and interacting with objects. In MMOGs (massively multiplayer online games), thousands of gamers play together on the same server. Moreover, Artificial Intelligence is used to create “intelligent” behaviours in non-player characters. This complexity certainly makes game testing more time-consuming, but also absolutely necessary.

Localization Testing
To be able to reach a larger audience worldwide, games are normally released in many different languages. Localization testing is used to ensure that the regional versions are not only translated properly, but also work in the correspondent cultural context.

Crowdtesting
A video game is usually developed for different platforms, for example for PC, PlayStation, or Xbox. But when it comes to the mobile gaming sector, the device fragmentation is much higher. There are countless combinations of devices, operating systems and browsers. Crowdtesting makes sure the game works on all kinds of devices by accessing 250,000 testers in the crowd. Especially for smaller developer teams, this is a good way to test gaming apps and browser games at lower costs. 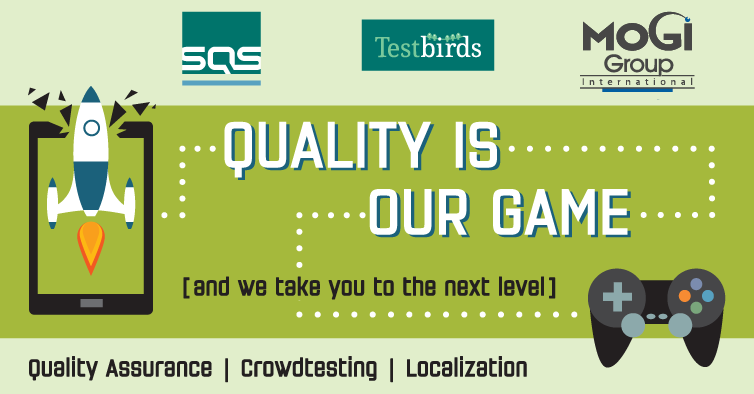 Are you attending GDC? Then schedule a meeting with us and get the chance to win testing budget for your gaming project and much more!

See you in San Francisco!

The History of the @: From Medieval Monks to the Early Days of the Internet

In this edition of “terms from the world of IT explained “, I will not talk about a term in particular, but about the history of a sign we all use...
Read More

It's no secret that the digital world is highly competitive today. The only way to have a chance at success in this over saturated marketplace is if...
Read More

Webinar | The Next Level of Game Testing

For our next webinar, we’ve joined forces with our partner Qualitest to give you insights on how to attract and retain users by testing and...
Read More

This is the End of Conversion Rate Optimisation

...at least as you know it.“Conversion rate optimisation (CRO) is a system for increasing the percentage of visitors to a website that convert into...
Read More

What is Crowdtesting and how do you use it? An overview

Crowdtesting (crowdsourced testing) has its roots in the open Source movement, Mozilla being the most famous organisation building on crowdsourced...
Read More

It’s time for another story from one of our testers. Meet vema, who was awarded Bird of the Month last July in the category Best Bug Finder. She is...
Read More

Testbirds specialises in the testing of software such as apps, websites and Internet of Things applications by using innovative technologies and solutions. Under the slogan, “Testing 4.0 – The Next Generation of Quality. Powered by Crowd and Cloud Technologies”, the company offers various testing methods to its clients looking to optimise the user-friendliness and functionality of their digital products. With over 250,000 registered testers located in 193 countries, Testbirds is one of the world’s leading crowdtesting providers. In addition, the IT service provider utilises cloud based technologies to support customers in the optimisation of their digital products. The combination of the two testing methods delivers a unique and extensive portfolio that takes the quality of software to the next level. Testbirds was founded in 2011 by Philipp Benkler, Georg Hansbauer and Markus Steinhauser. Today, the company has over 100 employees. Other than its headquarters in Munich, there are now offices in Amsterdam, London and Stockholm, franchises in Hungary and Russia and sales partners in Italy.